One of the key metrics we, at First Global, look for, when building our Portfolios, is: how correlated are our Positions. Meaning: do we have many stocks in the overall same category, eg, US NASDAQ, which then means that even if we have 25 such stocks, in effect, because of the very high correlation between them (95-99%), we actually own just one stock! And that's hugely risky, even though on paper, we own a diversified basket of 25 stocks.

Therefore, central to building a durable investment strategy is to constantly build several streams of uncorrelated- low correlated assets, that still directionally beat the market, and yet have very low chance of falling together. Think, JSW Steel and IndiaMART, together. Get the drift?

And this is possible because of a wide dispersion in asset class returns, even at the very same time.

Cross-asset investing is a strategy that is basically built on the premise that the correlation between various asset classes such as Equities, Fixed Income, Commodities and Currencies remains low enough most of the time to allow for investors to benefit from diversification. Some ultra- sophisticated investment strategies, driven by vast computing power, tend to be built around this assumption and thus, end up applying the famous Markowitz Model in their cross-asset portfolios.

In finance, the Markowitz model - put forward by Harry Markowitz in 1952 - is a portfolio optimization model that assists in the selection of the most efficient portfolio by analyzing various possible portfolios of the given securities/assets. Here, by choosing securities that do not 'move' exactly together (think low correlation), the HM model shows investors how to reduce their risk (defined by volatility here).

But, does this actually hold true when we look at the data?

The year 1997 was something Investors across the world couldn't have imagined. Asian " tiger nations"  were red hot.  The crisis started in Thailand on 2 July, with the financial collapse of the Thai baht after the Thai government was forced to float the baht due to lack of foreign currency to support its currency peg to the U.S. dollar. The contagion spread across the region and we saw equity markets in Thailand, Indonesia, Malaysia, South Korea & Philippines crash 60 to 75% in USD terms!

One would assume that such an extreme event would lead to broader sell-offs globally, right?  The amazing thing was that dispersion was large not only across asset classes but also across global equity markets.

Non-Asian emerging markets and European markets were on a tear that year. We saw Turkey, Greece, Mexico surge 85%, 58% and 53% respectively. Even developed markets such as the US (S&P 500) and Germany advanced by 47% and 33% respectively!

Cross-asset class divergence was also at display as US treasuries (10-year) outperformed commodities by managing to edge 3% higher while Crude and Gold dropped 30% and 21% respectively.

Blind diversification, of course,  does not help. That only kills returns, while reducing risk. Tactical positioning by understanding the drivers of cross-asset moves, vulnerability to correlation spikes and being cognizant of tail risks are key to achieving true global and cross-asset diversification.

In the following year, we saw a very similar picture in the non-equities space as yet again US treasuries (US 10Y: +6.2%) outperformed broader commodities (CRB Index: -13.5%). However, the story is equities reversed with Latin American emerging markets falling more than 35% while Russia was the worst. During the Russian Crisis of 1998, annual yields on ruble-denominated bonds rose to more than 200% and stocks lost more than 75% of their value.

So yes, just buying the winners/outperformers of the previous year would have almost certainly bankrupted you!  Return Dispersion continued in equities as we saw South Korean markets bounce back ferociously with an 85% surge while NASDAQ saw similar gains in 1998 in the lead up to the Tech Bubble in 2000.

Let’s now jump ahead to the Tech Bubble of 2000. This was the year of the correlation spike! Anything and everything sold-off except US Treasuries which benefited from the flight to safety like a classic textbook move. We saw EMs crack 30-40%, NASDAQ plunged 36% and even Gold couldn’t have saved you as it too delivered a negative return of more than 5% that year.

Interestingly enough, China was the only one that remained insulated and insulated how! The Chinese market skyrocketed 52% that year! Even today, China continues to remain a relatively low correlation exposure to have, especially in its fixed income.

By 2002 & 2003, the picture began to morph: Crude came back with a vengeance, delivering a stellar 44% return in 2002 and was up more than 5% in 2003. 2002 was a great year for commodities, as apart from Oil, we also saw Gold outperform most asset classes with a 24% return while the CRB commodities index itself surged by 15%. 2003 was a year similar to 2000, only that negative sign was flipped to a positive one. You could throw a dart at any asset class or equity market and manage to get a decent positive return. EMs (Thailand, Brazil, Turkey, India, and Russia) rallied 70 to 100%,

From 2010, began the unravelling of the "Long Emerging Markets/ Short US Equities" trade. The next 10 years belonged solidly to the US markets, with most Emerging Markets delivering zero returns over a decade, in US Dollar terms. So, again, we see massive Dispersion of returns, even within the Equity class itself.

"FAANGS" and NASDAQ became the go to trade for Investors across the world.

And from the last quarter of 2020, the data becomes even more dramatic: The crowded NASDQ (NDX) long trade delivered only 16% while the broader US markets (SPX) returned 16% too, therefore, it was clear that the NASDAQ was beginning to lose steam rapidly.

What the entire Analysis as above shows, investing is never a static game. It's a game of several possible coexisting outcomes, of which only one/ few will come true...and usually, that will be the one that's least expected.

One common investing bias is "Recency Bias": that is, the mind tends to expand a recent Trend, into as if that trend has always been there.

The FAANG bull market from 2016 to 2019, convinced everybody that NASDAQ and FAANGS were the only moneymaking game in town.

2020, specially the second half, showed a completely different picture, as most of the FAANGs went into hibernation, NASDAQ Index flattened out, Emerging Markets took off, forgotten markets like Greece, Turkey, Korea, Taiwan,  Scandinavian markets, blew out the lights.

In fact, even in 2019, the NASDAQ wasn't the best performing market. The top markets were Russia and Greece!

A longer term Analyses of global market and asset class returns show only one recurrent theme: that leadership keeps changing, almost every single year. There is very little persistence of returns in a majority of cases, and to add to the complications, there is very wide dispersion in returns as well!

Global investing is a complicated game, and an oversimplified, underanalysed approach can lead to very poor return payoffs.

(A version of this article was first published in Mint) 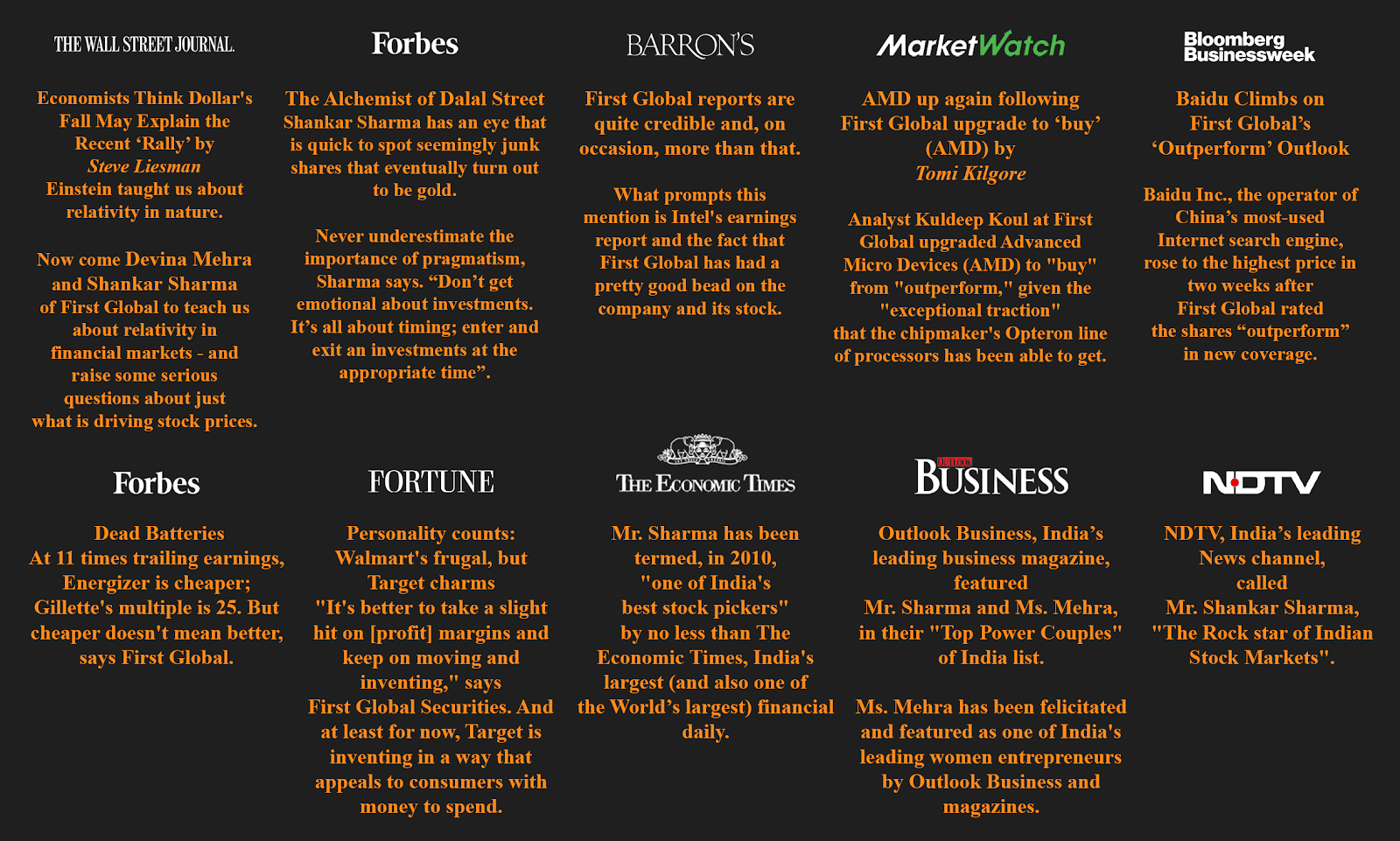 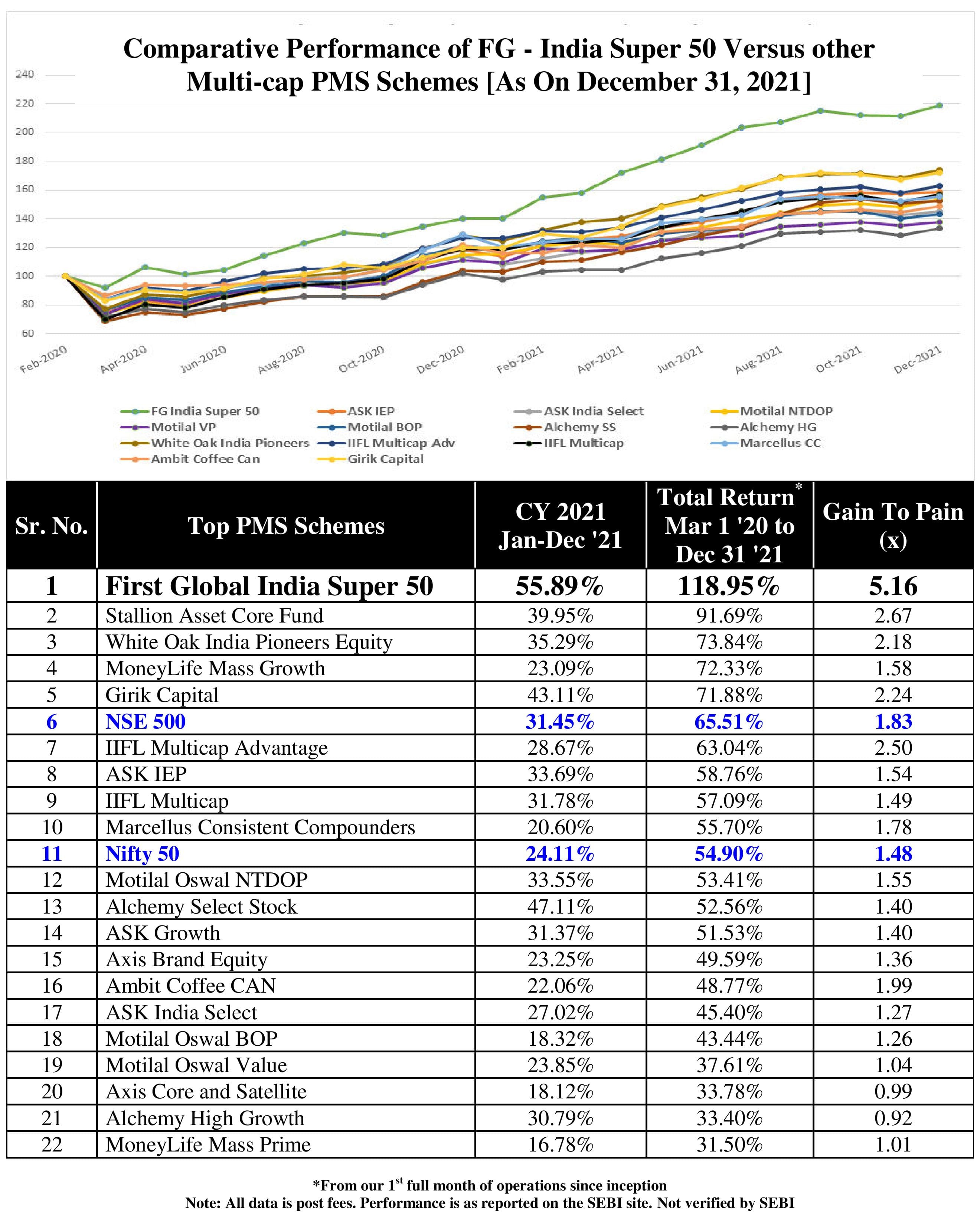 It's time to update your PMS Scheme to India's No.1
- India Super 50